SoundCloud is the first music service to adopt a version of the ethical pool principles in a user-centric royalty model and I have to applaud the effort. It’s a really good first step. “Fan Powered” royalties tries to connect the dots between what fans actually listen to and what fans actually pay for.

Remember, the point of the ethical pool was to do something right now to remedy the hyper efficient marketshare distributions of the “big pool” or “market-centric” royalty allocation model that is pretty much the rule with digital music services (and to one degree or another with streaming mechanicals, too, although that’s a topic for another day). I acknowledged the transaction cost involved of truly changing the model which would require renegotiating all the big pool catalog licenses. The workaround in ethical pool is to allow those who want out to opt in to a user-centric model that would be separate from the big pool. This is a way to avoid the significant transaction costs of trying to change a system that is working well for some but not all artists on the service.

SoundCloud appears to have done something very similar. This accomplishes another goal of ethical pool which is to not upset the big pool model entirely as it is working for a lot of people and there’s a benefit to the entire industry that flows from that success. By adopting this middle-ground user centric model, SoundCloud is actually able to promote its user centric method as a competitive advantage to attract independent artists to sign up with the service.

When you consider that the real choice of independent artists is to stream or not to stream because the revenues are microscopic but the cannibalization is gigantic, it is competition that is going to get the market forces aligned to produce real organic change. If services understand that offering at least some version of user centric is actually a competitive advantage, we may find that there’s greater uptake than anyone imagined.

It must also be said that fans will feel a lot better about SoundCloud’s model than the market-centric approach. It comes as abrupt news to fans that their royalty is being paid for music they don’t listen to–it’s only a matter of time until someone brings a false advertising claim against the services for failing to educate consumers about that one. And this is really the underlying issue with whatever flavor of user-centric you like: It’s better for the fans. As the erudite Martin Goldschmidt said in MusicAlly:

The bottom line, for me, is that user-centric is obviously a big win for the consumer. Long term, this will be a big win for artists, labels, distributors and DSPs. And we will all make more money.

Or as one fan said to me, I’m tired of my money funding crap. This is an isolated anecdote, but imagine what will happen if a million fans (or even 1,000) had this same reaction. All while the services are literally printing money.

As you can see from this comparison of Spotify share price to the FAANG stocks (Facebook, Amazon, Apple, Netflix and Google), Spotify has far, far outpaced the FAANG stocks in its relative growth rate. You can also see that the COVID pandemic that has decimated the artist community has been rocket fuel for Spotify’s riches and has made Daniel Ek a multi-multi billionaire all why paying out fractions of a penny to artists. 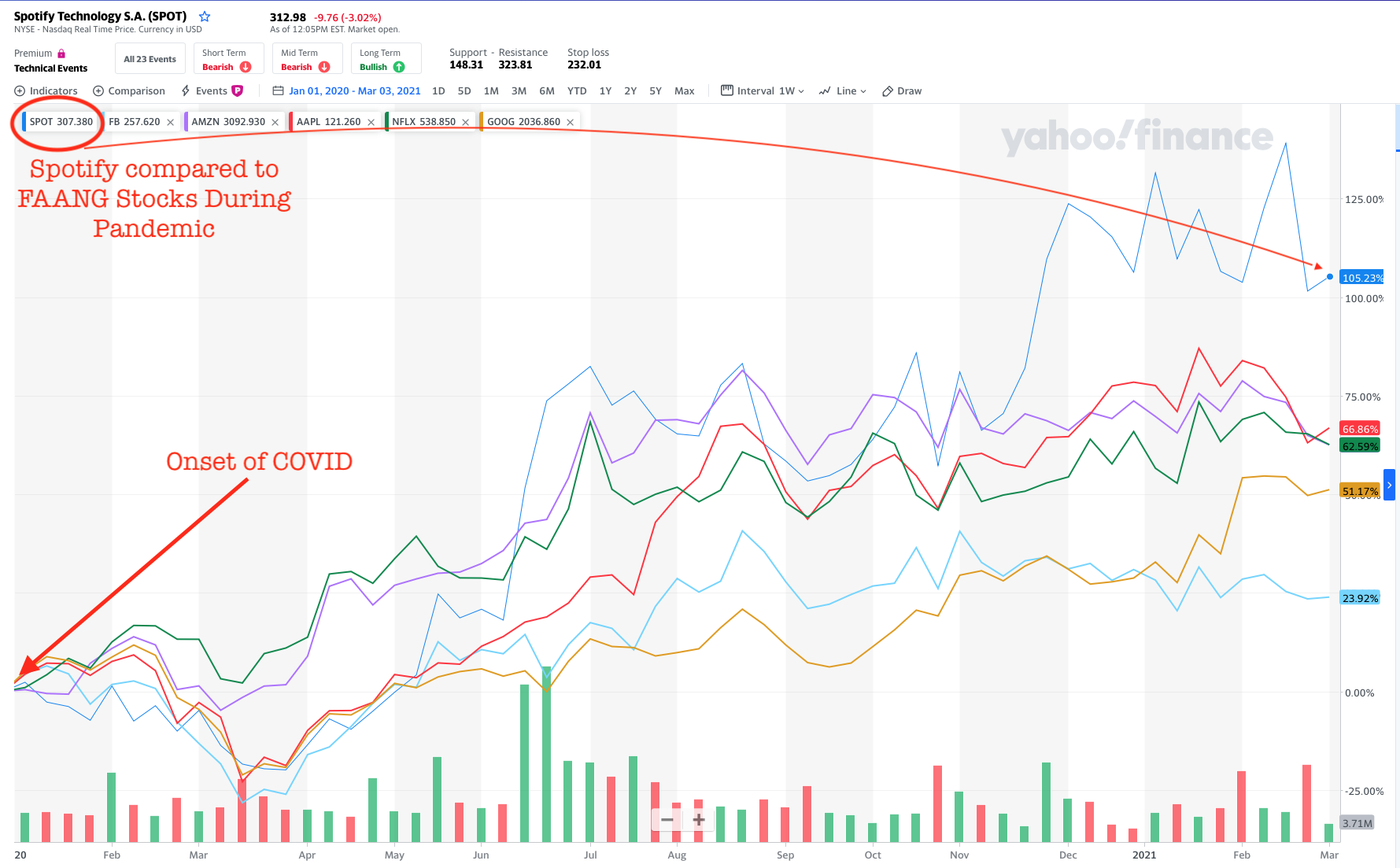 You can find the SoundCloud user centric royalty terms here. And bear in mind–we’re all better off if artists don’t feel they have to opt out of the entire streaming business in order to make a living.