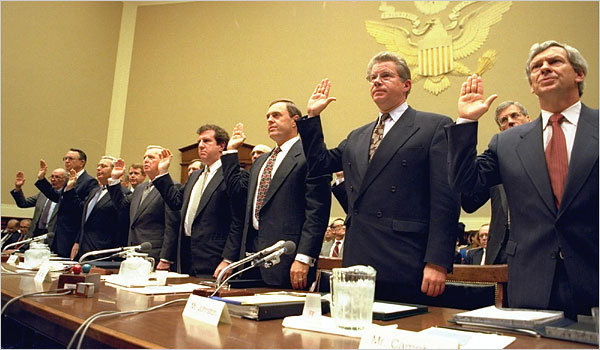 And then it turned out that Big Tobacco had been scientifically engineering tobacco to make it as addictive as possible.  Oops.  If you haven’t seen The Insider you really should, as you will better understand the problem with corporations profiting from stimulating addictive behavior.  And that is the real problem–it’s not that one thing or another is more or less addictive.  It is that corporations know that their product is addictive and they try to make it even more addictive than it already is.  They conduct secret research and make secret product modifications to enhance its addictiveness for one reason and one reason only–to make money off of human misery.

And then they tell us “Don’t be evil.”

Dr. Adam Alter’s new book suggests that the same type of Senate hearing could well be held on another type of addiction–addiction to smartphones, social media and the Internet.  And wouldn’t it be great if Senator Wyden could reprise his Big Tobacco performance from so many years ago, except this time with Eric Schmidt, Jeff Bezos, Mark Zuckerberg, Jack Dorsey and many, many more. 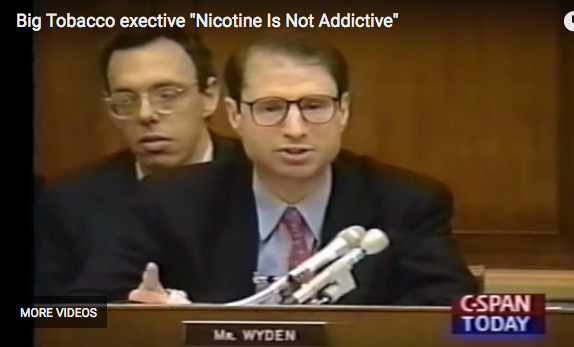 In Irresistible: The Rise of Addictive Technology and the Business of Keeping Us Hooked, Professor Alter, a professor of psychology and marketing at NYU, documents the rise of behavioral addiction and how Big Tech designs its products to leverage these addictions for profit.

If you doubt the behavioral addiction to social media and your smartphone, try this experiment.  Try only using your phone for phone calls for 36 hours.  Just check your email on your computer.  No email, Facebook, Twitter, Instagram, Google on your phone for 36 hours.  Sleep with your phone in another room, and don’t touch it until after breakfast.  See how you react.

And don’t forget that Big Tech studies us, their users, in real time and continually.  When the study sample is the size of all the billions of users of monopoly platforms like Google and Facebook, that data is very, very predictive.  For example, Facebook data lord Adam Kramer (more about him shortly) said in an interview that Facebook’s large user base was one of the reasons he joined Facebook:

A: Facebook data constitutes the largest field study in the history of the world. Being able to ask–and answer–questions about the world in general is very, very exciting to me. At Facebook, my research is also immediately useful: When I discover something, we can use this to make improvements to the product. In an academic position, I would have to have a paper accepted, wait for publication, and then hope someone with the means to usefully implement my work takes notice. At Facebook, I just message someone on the right team and my research has an impact within weeks if not days.

Q: What are some of the interesting questions you’ve answered since you’ve been here?

A: Do emotions spread contagiously? What do the words we choose have to say about how we are and who we are?

In an experiment with people who use Facebook, we test whether emotional contagion occurs outside of in-person interaction between individuals by reducing the amount of emotional content in the News Feed. When positive expressions were reduced, people produced fewer positive posts and more negative posts; when negative expressions were reduced, the opposite pattern occurred.

These results indicate that emotions expressed by others on Facebook influence our own emotions, constituting experimental evidence for massive-scale contagion via social networks. This work also suggests that, in contrast to prevailing assumptions, in-person interaction and nonverbal cues are not strictly necessary for emotional contagion, and that the observation of others’ positive experiences constitutes a positive experience for people.

If Facebook is studying something as sophisticated as “emotional contagion through social networks” in a study that we know about, what do you think they are studying that we do not know about?  Is it more or less likely that these huge companies are creating studies like the Brown & Williamson tobacco study on adding addictive agents like ammonia and coumarin to cigarettes, or Ford’s infamous “Pinto memo” analyzing the cost/benefit fixing the Pinto’s exploding gas tank?

Dr. Alter devotes the first few chapters of Irresistable to the history and scientific foundations of the study of addiction.  You may find this exposition a bit dry, but stick with it.  The background is well applied in his detailed discussion of Big Tech’s dependence on addiction.

Alter lays out some of the most important issues of our time that affect both adults and children indiscriminantly.  In one of the first books of its kind, Dr. Alter arms us with the knowledge to combat this attack on our sensibilities.

It is important to note that when Steve Jobs introduced the iPad, he forbade his own children from using it.  If anyone knew what he was doing and what the risks were, it would have been Steve Jobs.  He probably forbade them from smoking, too. My bet is that it was for the same reasons.

As Dr. Alter noted in a recent Business Insider video:

There’s a school in Silicon Valley that doesn’t allow the use of any tech. It’s called the Waldorf School and it’s fascinating because the school has no computers, no iPads, no iPhones. They try to minimize tech altogether and so people enjoy a lot of time face-to-face, they go outside a lot. What’s interesting about this school is 75% of the students there are the children of Silicon Valley tech execs, which is striking. These are people who, publicly, will expound on the wonders of the products they’re producing and at the same time they decided in all their wisdom that their kids didn’t belong in a school that used that same tech.