Spotify is experiencing the joys of being a public company–or at least a quasi public company if you count public companies as ones whose shares are actually held by the public as in Mrs. & Mr. America.  But both analysts and investors have to always remember that Spotify did not conduct an IPO in the traditional sense where an underwriting syndicate of bankers bought a block of shares from the company that the syndicate then resold to the public.  This is why Spotify’s recently announced $1 billion stock buy-back program bears closer scrutiny.

Instead they conducted a DPO, a direct public offering which is unusual and radically different than an IPO.  The DPO has an essential conflict–the sellers of shares are insiders in the issuer and have an incentive to keep the stock price high and to manipulate that stock price however they can.  Like through a stock buy back after less than a year of trading, for example.

From a financial markets point of view, that DPO makes almost everything about Spotify’s stock a different analysis than a market traded IPO–including Spotify’s recently announced stock buy back.  Stock buy backs happen all the time, particularly in declining markets.  But what is unusual is for a company that’s still in its first year of operating as a public company whose shares are largely traded by insiders and is a money losing company to take the odd step of using $1 billion of the shareholders money to buy back stock.

Or maybe not so unusual if the shareholders whose money it is are both the sellers of those shares and the beneficiaries of the stock buy back–as they try to find a bigger fool to sell the shares to in the retail market.  Another core problem with DPOs is that you don’t have an independent body setting the opening price as you would with an underwriting syndicate.  DPOs have to get an opening price from somewhere–so Spotify’s pricing problem started with the SEC and NYSE allowing Spotify to price at its last privately traded price (as some shares of Spotify traded in what used to be called a “Rule 4(a)(1)1/2” exemption for resale of restricted stock, now codified in Section 4(a)(7) of the Securities Act by the FAST [Breakfast at Buck’s] Act–a bit of a gloss but OK for our purposes here).

So by letting Spotify use the private market for restricted stock as a proxy for a market price, at a minimum the SEC and the NYSE assume that the rights, preferences and privileges of an unregistered share of Spotify stock are the same as a share of registered SPOT.  They’re not.  They also assume there are no price distortions from the relatively low number of unlegended restricted shares available in the private market.  They also assume that there’s nothing odd about a company like Spotify–staring down relatively slam dunk infringement lawsuits of significant value and in a money-losing business run from 10 floors of the World Trade Center like it was Apple or something–pricing way above the opening prices of Amazon, Facebook, Google and so on.

If that sounds cynical, it really isn’t once you understand the dynamics of a DPO compared to an IPO.  The DPO produces a market effect that is similar to the business model of Larry Ellison’s famous 1999 “HeyIdiot.com” parody of an Internet company:

HEYIDIOT.COM is tightly focused on selling just one product. Elegantly enough, that product is the stock of HEYIDIOT.COM, which will be offered to you for sale on-line at our web site of the same name. Buying the stock is simple, you can buy as much stock as you want with the only rule being that each new purchase must be executed at a successively higher price.  We call it a cash portal.

We’re seeing the result of the DPO come home to roost in Spotifyland which looks something like this:

After a run up in the stock price–on low volume and with no meaningful news–the stock retraces its steps and suggests its testing lower lows.  It’s hard to say what “price support” there is for a stock that’s had less then a year of trading, but let’s just say that if it broke through $100 to the downside, there would be rending of garments and closer examination of executive compensation unless Spotify executives could continue to blame artists for “high” royalties.

Also note that three out of four of Spotify’s biggest volume days were to the downside, and that the stock has been trading down, essentially, since August. 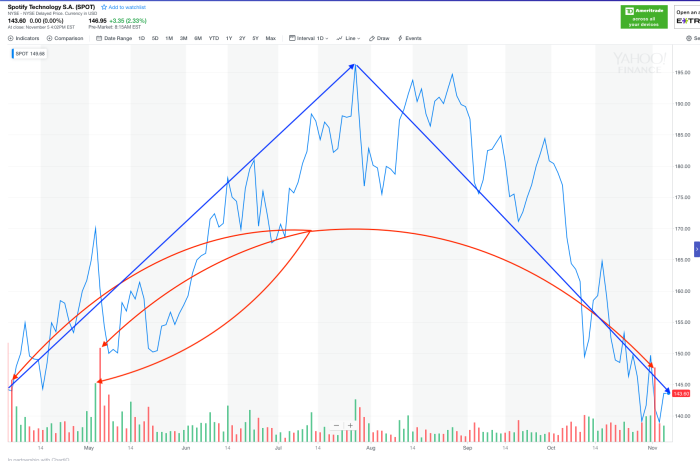 We can also assume that at these low trading volumes, the shares have gradually been accumulating in the trading accounts of Mrs. & Mr. America which also means that there are potentially more and more shares available to short sellers–the buy high sell low crowd that I discussed back in March. 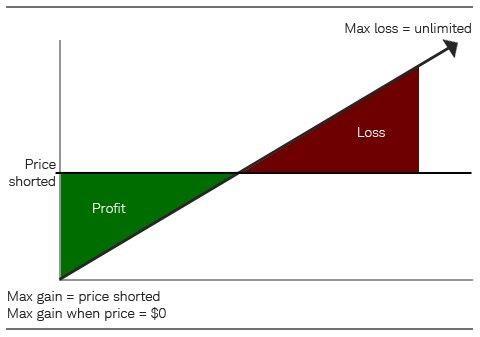 In fact, there are a few November 30 puts in the $115 range already.  Daniel Ek has announced he’ll be selling Spotify shares with a value of about $20 million on a monthly basis for a while.  You have to notice that those board-approved sales are overlapping with the board-approved Spotify stock buy back that will help to support the higher price point while insiders dump their shares.  This is another inherent conflict problem with the whoe DPO concept–but when you have the 1:10 voting power over your board as does Mr. Ek, many things are possible.