As I’ve noted a couple times, convertible debt financing is all the rage with digital music service these days.  Deezer turned to it after a busted IPO in France, and now both Pandora and Spotify went there.  What’s attractive about debt?  Different reasons depending on the company’s situation.

Convertible debt is a special form of (usually) secured or collateralized loan that looks like any other loan except that it is convertible into the shares of the company.  The amount of time between the funding of the notes and the call on the debt gives the company some running room.  Given that the shares of the company may be worth less (or worthless) at the time the note converts, there’s usually some equity kickers in there along with a pretty bullet proof “event of default” clause.

Depending on how much money is involved and the negotiating position of the lender (usually near infinite leverage at this point), it’s possible for the lenders to effectively take over the company.  If you’re in the management team, that kind of thing can ruin your whole day.

When a company has already been to the well  in the public equity market like Pandora, sometimes going a third time is just not in the cards.  This is particularly true when the company’s share price is going the wrong direction, like Pandora. 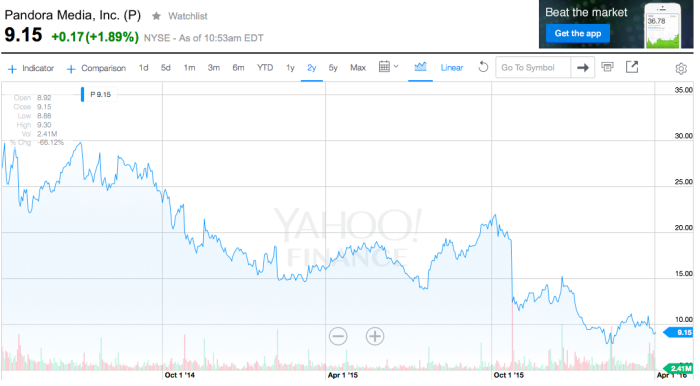 For Spotify, I’ve already speculated that the main reason Spotify would like converts is because it avoids establishing a valuation for the company.  This can either be a clever move or a desperation hail Mary.  Since both Pandora and Spotify are suddenly in the debt business in a big way (Pandora $300,000,000 and Spotify $1 billion) something common to both caught my eye and that is Texas Pacific Group (or “TPG”).

According to the Wall Street Journal and Bloomberg, TPG is a lender in Spotify’s $1 billion line of convertible debt.  As Spotify is not publicly traded (and I presume these are not publicly traded bonds), we don’t have all the details you’d get in a public offering.  But it looks to be a pretty rich deal for the lenders as you would expect.

According to the WSJ:

Private-equity firm TPG, hedge fund Dragoneer Investment Group and clients of Goldman Sachs Group Inc. [which probably means Sean Parker] participated in the deal, which has been signed and is expected to close at the end of this week, these people said.

In return for the financing, Spotify promised its new investors strict guarantees tied to an IPO. If Spotify holds a public offering in the next year, TPG and Dragoneer will be able to convert the debt into equity at a 20% discount to the share price of the public offering, according to two people briefed on the deal. After a year, that discount increases by 2.5 percentage points every six months, the people said.

Spotify also agreed to pay annual interest on the debt that starts at 5% and increases by 1 percentage point every six months until the company goes public, or until it hits 10%, the people said. This interest—also called a “coupon” and in this case paid in the form of additional debt, rather than cash—is commonly used in private-equity deals but rarely seen in venture funding.

In addition, TPG and Dragoneer are permitted to cash out their shares as soon as 90 days after an IPO, instead of the 180-day period “lockup” employees and other shareholders are forced to wait before selling shares, the people said.

TPG and Dragoneer will buy $750 million worth of the deal, with the remainder going to clients of Goldman Sachs Group Inc., which advised on the financing, according to people familiar with the deal.

Spotify indicated to new investors it plans to go public in the next two years, people familiar with the matter said.

It’s possible to get more expensive money, but that would involve credit cards.  One thing I feel confident in guaranteeing about TPG, they got their pound of flesh.  And for Spotify–this deal looks pretty desperate.

As an aside, the Bloomberg reporting continued the thoughtless canard:

[L]ike other streamers, Spotify makes losses because it has to pay high fees to the music labels. On about 1 billion euros ($1.1 billion) of revenue in 2014, Spotify suffered an operating loss of 165 million euros, with some 70 percent of costs going to pay labels.

Wrong–the reason that Spotify loses money is because it is trying to maintain a near vertical growth curve.  Remember “get big fast”?  The mantra of the Dot Bomb Collapse?  And then there’s that nasty bit of not actually paying songwriters or bothering to get a license.

But TPG also turned up at Pandora where they got a board seat.  According to a Pandora press release:

[Pandora] is expanding the size of Pandora’s board from nine seats to 10 seats with the addition of Anthony J. “Tony” Vinciquerra, a technology, media and telecom expert with over 30 years of industry experience. Vinciquerra will join the board as a Class III Director and will be included in Pandora’s proxy statement for election at the 2017 Annual Meeting of Stockholders.

Mr. Vinciquerra has a background working very successfully for that well-known milktoast, Rupert Murdoch.  I find it interesting that within a month of Mr. Vinciquerra joining the board Brian McAndrews is out and Pandora is reportedly selling the radio station it bought for the sole purpose of sticking it to songwriters.  Hard to say if Mr. Vinciquerra is kicking ass and taking names, but ousting the guy who championed dropping $450 million on Ticketfly, antagonizing creators to the point of rank hostility and did not understand the definition of payola might be a step in the right direction.

Whether he can do the same for Spotify is an open question.

Who knows?  Peace could be breaking out all over.  And that would be nice for all of us.

One thought on “What is Texas Pacific Group Up To with Pandora and Spotify? Something? Anything?”