Small business people dealing with big business people always have the same fear–what if they just stiff me.  You know going in that there are some big businesses that simply factor into their financials that the businesses will get away with stiffing a percentage of their contractors with claims of unsatisfactory work daring the small business to sue.  Claims that may be trumped up, so to speak.

Some–not all surely, but some–Silicon Valley companies have taken this “pay them when they sue” mentality to it’s logical conclusion under the guise of the faux “DMCA license” based on sheer bargaining power.  At least the real estate developer stiffing contractors on trumped up claims did actually hire the contractor with a promise to pay.

The Silicon Valley version of “pay them if they sue” is wrapped in the cant of Valley Boy catechism and the leap of faith to “the machines made me do it” or “disruption” resulting in the gospel of “permissionless innovation”.  That’s the trumped up theory that allows the “disruptor” to just take the contractor’s labor and materials without negotiating a contract or paying a dime and then saying “so sue me” and my $20 billion valuation.

Hi @Snapchat Do you pay ppl for the use of their work? Been off a record label now for 5 years. Is this legal? I should be paid PLS RETWEET pic.twitter.com/9qq9iKltFG

Remember–Snapchat and Facebook, two massive Silicon Valley darlings, have NO licenses and REFUSE to negotiate.  (Google does get licenses for some of its platforms like YouTube but is also busily serving millions of NOIs on the Copyright Office to use songs without paying royalties and also gaslighting the UK music industry with yet another meaningless “voluntary” code of conduct for the billions of takedown notices Google receives for search that Google refuses to fix.)

Kate Nash has put her finger on the key factor in the greatest income transfer of all time–it’s not that the music is free because it is without value, it is free because it is stolen using a trumped up legal theory based on loophole seeking behavior in a legacy statutory construct.  Nobody ever intended for the “safe harbors” to be used to trump up a nonexistent “license held in place by unequal bargaining power.

[An] imbalance I want to talk about is the safe harbour provisions, and similar terms in other countries. They were introduced, with some foresight, by the legislators in the USA framing the DMCA, to provide a notice and take down procedure for unlicensed content. But the legislation has been distorted into a protective wall behind which cyberlockers and torrent sites, and companies such as YouTube and Grooveshark, operate.

The original intent was to protect reasonable people acting reasonably from falling foul of the law, to enable the digital economy to grow without “ gotcha “ law suits against ISP’s who had no idea that their networks were being used for infringement. They were not intended to provide fortress walls behind which companies could build billion dollar businesses on content that had not been cleared. They were never intended to become a de facto “ licence “.

Kate Nash said it best:  “But where’s my paycheck?” 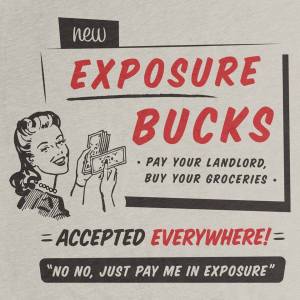