All of you who subscribe to the New York Times, fly Quantas, use any of a number of mobile carriers or who are in the 6th month of your third Spotify 30 day (or 90) free trial may be interested in this post.

According to Billboard in a story titled “Spotify Officially Hits 50 Million Paid Subscribers“, the “official” announcement came from a tweet:

I found this intriguing–how did we go from “Spotify Officially Hits 50 Million Paid Subscribers” in the headline to a tweet that doesn’t really say the same thing?  Maybe like this? 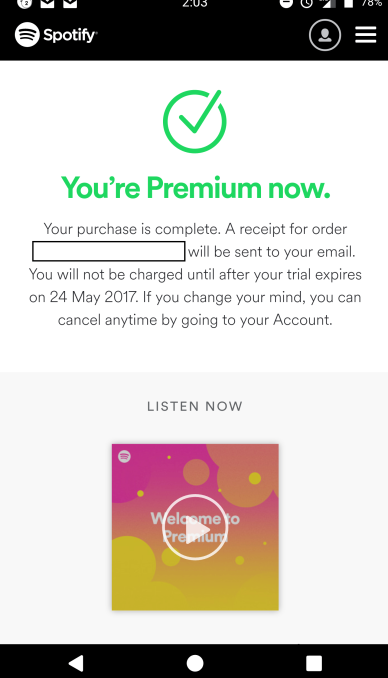 First, what makes a tweet “official”?  Much less “official” totals of “paid subscribers”?  Finding out may be like asking what makes ketchup “fancy”.

Newspaper subscriptions have long been verified by a company specializing in verifying circulation.  Television has the Nielsen ratings, music has Soundscan, and so on.  None of these systems are perfect, but they make it harder to outright misrepresent success in a business where frequently the only people who really know how well they are doing are the people who would like you to believe they are doing well.  This is nothing new, it’s as old as moral hazard.

The quest for truth leads one to independent verification services.

This is important because I have yet to find anyplace that Spotify actually says the 50 million subscribers were “paid”.  The press leaped to that conclusion, but Spotify did not say that.

And neither does Apple, a company which is already public and has to be careful what they say about the money they are making or not making.  Yet somehow nobody transforms Eddie Cue’s statement that Apple has “well past 20 million subscribers” into an “official” statement implying a verified number of “paid” subs.

Actually–it may well be that there is a significant revenue difference between “paid subscribers” and “subscribers”.  As the Music Industry Blog wrote last year:

[T]here is a more important story here: Spotify’s accelerated growth in Q2 2016 was driven by widespread use of its $0.99 for 3 months promotional offer. Which itself comes on the back of similar offers having supercharged Spotify’s subscriber growth for the last 18 months or so. In short, 9.99 needs to stop being 9.99 in order to appeal to consumers.

As Spotify has been “dominant” in the music subscription business for a while now (and yes, I mean that in an antitrust sense of “dominant”), it seems that it’s high time for someone to independently audit the veracity of the number of their subscribers.